USA at the World Games

The sport of taolu wushu was a sensation at The Worlds Games 2022 in Birmingham, Alabama, USA which took place on July 12-13. With over 50 elite athletes participating from 26 countries and regions representing almost every continent, the competition was fierce as the athletes were selected from the last World Wushu Championships that took place two years ago in Shanghai, China. The wushu event was held along with karate and jiujitsu at the Bill Battle Coliseum, which is a 2,000 seat arena at the Birmingham-Southern College. The event was previously scheduled for 2021 and was worth the wait.

USA national athletes Mia Tian and Brian Wang took the golds in the combined events of female broadsword/staff and male straightsword/spear, respectively. Their wins helped USA place second overall in GSB ranking at the World Games with a total of 16 golds and 44 medals total. Ukraine placed third with 16 golds and 45 medals total and Germany placed first with 24 golds and 47 medals total.

Both Mia Tian and Brian Wang are veteran USA Taolu Wushu Team Members. They have both qualified via the biennial team trials since 2013. Their teammates Alex Ni (USA team member since 2016) and Judy Liu (USA team member since 2018) were also strong contenders at the games. Due to a required exercise just prior to the competition, Judy was injured during her routine and unable to compete. 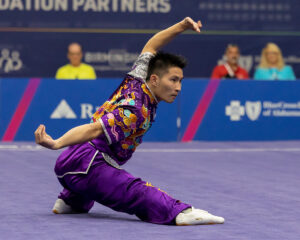 Men’s Changquan event started off the competition on the morning of July 12. An explosive performance by Korea’s Hasung Lee set a high bar with a finishing score of 9.503. Edgar Marvelo of Indonesia was able to narrowly topple Lee’s ranking with a final score of 9.533 and a gold. Strong, yet rookie, Alex Ni performed a solid routine despite a 0.45 deduction landing him a score of 9.013. Roman Reva, from resilient Ukraine, gave a sharp performance, landing himself with a score of 9.253 and a bronze.

On the morning of the second day, both Brian Wang and Mia Tian performed in their first events. In Men’s Straightsword, France’s Benoit Denolle struck the audience with an exciting routine yet under-qualifying score of 8.933. Next, Jason Chen-Leung of Canada and Samuel Mak of Great Britain battled for top scores, ending up with 9.430 and 9.240, respectively. Brian Wang, as the fourth competitor to perform, executed an explosive and near flawless routine scoring the top score of 9.523, keeping competitors Alfonso Barbarisi of Italy and Benjamin Mueller of Switzerland at bay.

Immediately following, the Women’s Staff competition had the bar set high with Mia Tian being the first competitor to go up with a finishing score of 9.303. Her immediate rival Alina Krysko of Ukraine barely surpassed Mia’s result with an awestrucking program scoring a 9.373. Mia’s other contemporary competitors from Hong Kong, Mexico, and Chile weren’t able to challenge their performance. 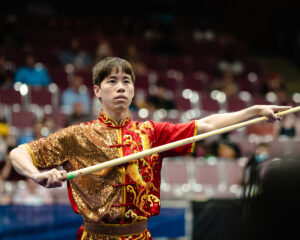 On the evening session of the final day of competition, Male Spear concluded the combined Male Straightsword/Spear event. Canada’s Jason Chen-Leung, placing third in the previous event, started the closing event but was unable to pull into the top three in the Spear event, landing a 9.300. Italy’s Alfonso Barbarisi quickly overtook the event scoring a 9.463 putting him into second place with Great Britain’s Samuel Mak pulling himself into third place with 9.443. Despite a minor deduction, final competitor USA’s Brian Wang stole the show taking first place in Men’s Spear cementing his gold in the combined events. 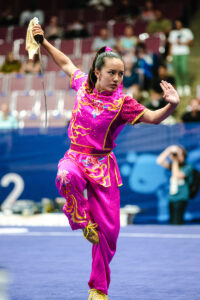 Ensuing USA’s first gold in wushu at The World Games, Women’s Broadsword was the last event for America to win a second gold. USA’s Mia Tian took first with 9.487 as the first competitor with a fiery performance with close gains by Hong Kong’s Michelle Yeung and Ukraine’s Alina Krysko taking second and third, respectively. Concluding the American representation in the final combined events, Team USA brought home a total of two golds in the Taolu Wushu Competition.

Performances by all the medalists rounded out the competition at the Wushu Closing Ceremony following the events and medal ceremony. A good showing by all athletes made this event a crowd favorite at the World Games – making this a great step for wushu towards global recognition.