“That person behind you was stealing your qi.”

In this way Sifu Randy Li might explain to you why, earlier that evening, he pulled you over to another part of a crowded room. He was only looking out for a friend, as he always did. 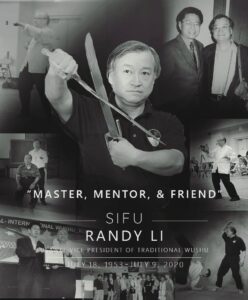 A Picture Contains No Words

Sifu Li was impossible to capture in photos.

In photos, he looks calm and serene, placid, a hint of a smile on his face, the long earlobes completing the illusion that you’re looking at a Chinese Gautama Buddha. In person, he was brimming with energy; no person who spent much time around him can forget how with his rapid-fire Cantonese — or English for that matter — he was alway busy with something, giving advice about food or drink or Yang Style Single Whip or explaining Wing Chun footwork or ideas about the USAWKF or just helping out someone who looked lost.

Sifu Li in photos thus presents a happy but stolid Budai, Maitreya, a “Laughing Buddha,” so why do his family, friends, colleagues, and students remember him rather as a man who never stood still?

From Macau to Kansas

Sifu Li was born in Macau in 1953. He began learning traditional Chinese martial arts at the age of ten, focusing eventually on Wing Chun (2nd generation in the Ip Man lineage) and Yang Style Taiji (6th generation). He also became a master of Daoist Qigong and Feng Shui.

After finishing high school, he traveled to the U.S. for his university education, completing a B.S. and then an MBA, and settled in Overland Park, Kansas, a suburb of Kansas City, where he opened Inner Gate Ving Tsun, later Wing Chun USA.

As the 90s progressed, Sifu Li became well-known among his peers, especially to those in the midwest, southwest, and later the west coast, as he was always traveling to competitions and making friends in the burgeoning wushu community. His advocacy for the advancement of Chinese martial arts ultimately brought him to a position on the USAWKF Board as Vice President for Traditional Wushu, where he was an active member for a decade and a half. “He stood up courageously for the federation at times of uncertainty and challenges,” says President Goh.

Sifu Li had a tremendous appetite for life, but he also quite literally had a tremendous appetite for food. “You should go to a buffet and really have your fill once a week,” he explained to USAWKF Vice President Malee Khow. While he was by no means slender, we can certainly agree with Gene Ching, in his recent article on the passing of Sifu Li [[[http://www.kungfumagazine.com/forum/showthread.php?t=71824]]], when he wonders how Sifu Li could eat so much and maintain even the figure he had.

When Sifu Li would perform at Masters Demonstrations, it was usually to demonstrate combat applications, or perhaps to do a brief demo of Wing Chun Chi Sao (sticking hands). He did not often perform forms — but not because he was selfish, or because he had a strange or stilted style unsuited for performances. Look at any of his pictures and you’ll see orthodox Ip Man Wing Chun and beautiful, classical Yang Style postures.

No, it was simply that he didn’t want his internal qi leaking out during a performance. He did have ways of working around this. I only saw him perform Wing Chun a handful of times, and usually he would face a pole in the middle of the gymnasium, or away from the audience.

Faced with this picture of the kung fu and qigong master who seemed so concerned with conserving his qi, one might be forgiven for assuming that the photos we have of Sifu Randy Li present an accurate picture of the man. Somehow nothing could be farther from the truth. Sifu Li was in fact extremely generous with his time and energy, protective of his friends, and not shy with his opinions.

In a Facebook post, longtime student Cindy Bunker put it beautifully: “You transformed conflicts between people into resolutions and somehow maintained strong friendships with both sides through all the years. You were always there to help people, and everyone knew they could trust in and count on you.”

USAWKF President Goh has similar thoughts: “He was a true friend, always thoughtful and with great considerations for his friends and people around him. We will miss him greatly.”

In describing his generosity, former USAWKF Vice President Tat Mau Wong recalls: “He was generous in every aspect of his life, whether it was his kung fu, his time, feng shui, or his famous mala beads, which I don’t think he ever made any money on. I often saw him giving them away, and he would sometimes give me some even after I bought a few from him.”

Those of you who may have wandered across his Facebook page in the past no doubt remember that he got into his fair share of online spats. Merely argumentative? Not at all. In everything he did, he was a passionate advocate for truth over deception, for fairness over graft, and of course for the integrity of martial arts.

The Man Behind the Fozhu

As the years progressed, so did Sifu Li evolve. In later years, more and more fozhu (佛珠, mala or prayer beads) draped over his wrists, arms, and shoulders, often taking up most of the visible space on his body, not so much as a religious symbol (he was a Christian) but for their, you guessed it, qi benefits. In martial arts, he began investigating the commonalities between Wing Chun and Yang Style Taiji in his teaching.

The person underneath was as passionate and caring as ever. “He wasn’t just a friend and colleague, but like an older brother to me in the many years I knew him,” says Malee Khow. For Tat Mau Wong, Sifu Li was a brother, too. “I met Sifu Li in 1995, and with a couple other masters we formed a brotherhood. Whenever we stayed in a hotel for a tournament, we would stay up talking to 2 or 3 am about anything and everything.” And finally, student Cindy Bunker sums up the love his family, friends, and colleagues felt for him when she describes how “the memories, the knowledge, the teaching, the healing, the good feelings, the wisdom, and the love you imparted on all of us will be remembered and treasured forever.”

The Man the Photos Couldn’t Capture

Photos capture none of these facts about Sifu Li. He was ablaze with passion and zeal, but the camera didn’t need that qi. His loved ones, his friends, his colleagues, his students, his arts — that’s where he directed his love. And that’s what his loss means to those of us who knew him.

COVID-19 updates from President Goh Passing of Dr. Chengde Wu
Back To Top